Since biochar can persist in soil for several thousands of years, the single application of biochar can be expected to produce beneficial agricultural and environmental effects for the long-term. However, there is limited information available about the long-term effects of biochar particularly from the boreal regions. We studied the effects of softwood biochar on plant nutrient uptake dynamics for the first eight years from the two ongoing long-term field experiments with contrasting soil properties: fine textured Stagnosol and coarse textured Umbrisol in Helsinki. In addition, we also investigated the effects of biochar on greenhouse gas emissions and soil physical properties in the long-term.

The results were not optimistic since only limited effect of biochar was observed in terms of plant aboveground biomass yield over the eight years in these two fields. However, there were two exceptional growing seasons (barley in 2013 and peas in 2016) when biochar increased plant biomass yield in Stagnosol with higher fertilization rate. We hypothesized that the increased plant biomass yield by biochar in these two cases were the result of pre-crop effect because nitrogen fixing legume or grass were planted in the previous years in both cases.

The most notable effect of biochar observed was increased plant K content in Umbrisol and decreased plant contents of Al and Na in Stagnosol.  This suggests that biochars can function as a K source in K poor soils and may relieve the salinity and Al toxicity stress of plants. We also studied how the effect of biochar on plant nutrient content change over the time. We found that biochar decreased the plant Mn content while increased the plant Cd and Mn contents over the time in Umbrisol. Similarly, the plant contents of several elements were increased by biochar over the time in Stagnosol. 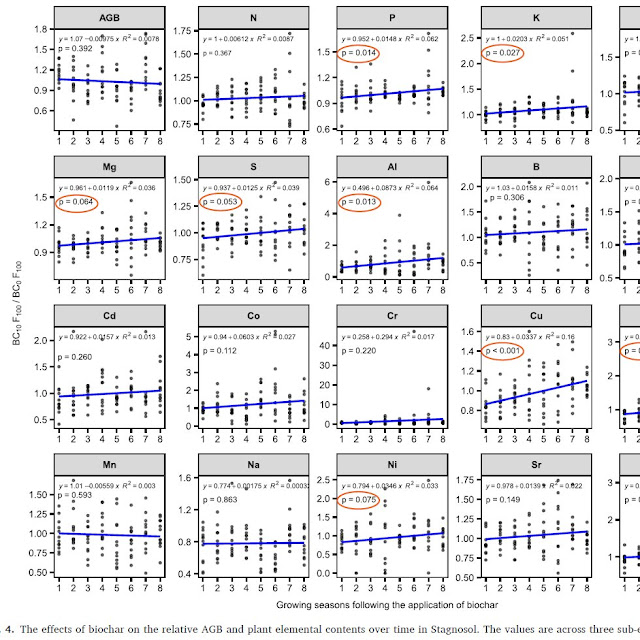 We found biochar had potential to affect the N2O emission even after seven years of the biochar application. Whereas, the beneficial effects of biochar on soil physical properties in the initial years disappeared in the long-term.

The leaching of applied nitrogen (N) fertilizer from agricultural fields to the waterways is one of the major environmental issues that lead to algal blooms or eutrophication. The changing climate with warmer winters and increasing precipitation in wintertime further exacerbates the N leaching problem, leading to  increased N leaching to the Baltic Sea in Nordic conditions unless new methods to reduce N leaching are developed and put to practice.

We measured N leaching in the soil amendment field experiment maintained by Soilfood Oy (https://soilfood.fi/en) at Qvidja farm (Päästösäästö project site) in Parainen, south-western Finland (www.qvidja.fi/en). There, we tested the effectiveness of two types of biochars produced from spruce and willow, and a ligneous nutrient fiber (pulp and paper mill side stream) in reducing the leaching of N during the growing season of 2017 and the following winter. We used resin bags placed under the plough layer to collect the dissolved inorganic nitrogen passing through the soil column. The resins were collected at frequent intervals and extracted  to measure the amount of leached ammonium and nitrate.

We found that only the studied spruce biochar significantly reduced nitrate leaching by 68% during the growing season of 2017 compared to the corresponding fertilized control. The results were similar during winter, but differences between treatments were less clear because of high variation. Such reduction in nitrate leaching could be mainly due to the physical entrapment of water and dissolved nitrate inside the biochar pores.

The spruce biochar (328 m2 g-1) had much higher specific surface area than the willow biochar (1.3 m2 g-1). This means that the spruce biochar had more small pores. Such small pores can withhold the percolating water, eventually retaining the dissolved nitrate. This was further supported by increased soil nitrate concentration in the spruce biochar treatments. However, the willow biochar and the nutrient fiber did not clearly reduce the leaching of either ammonia or nitrate. Therefore, the reduction in nitrate leaching is attainable in boreal conditions by applying appropriate type of biochar with a reasonable application rate (21 tons ha-1). The detailed mechanisms of nitrate retention by biochar requires further study. Investigating the pore structure characteristics of biochars produced from a wide range of feedstock with different pyrolysis techniques and combining such characteristics to nitrate leaching measurements would be needed to facilitate the development of tailored biochars that can efficiently retain nitrate for plant availability and keep it safe from leaching.

As part of our PhD student Subin Kalu's doctoral study, we have just published a in Biology and Fertility of Soils a greenhouse pot experiment to test the effectiveness of two types of wood-based biochars in reducing N leaching, N2O emissions, and plant N uptake. Using 15N tracing technique, we studied the effects of biochars on the fate of added ammonium (15NH4+) and nitrate (15NO3-) fertilizer.

The two types of biochars used were a regular biochar and a Kon-Tiki produced nutrient-enriched biochar at two application rates: 1% and 5%. Kon-Tiki is a conical kiln for producing home-made biochar that follows the principle of flame curtain pyrolysis i.e. even though the feedstock seems to be burnt in an open fire, the flame itself acts as a barrier between feedstock and atmosphere maintaining oxygen-free condition. Right after pyrolysis, the hot Kon-Tiki produced biochar was enriched with a cattle-slurry mixture. 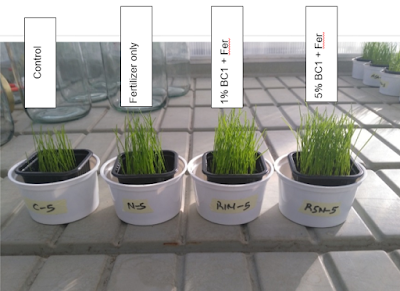 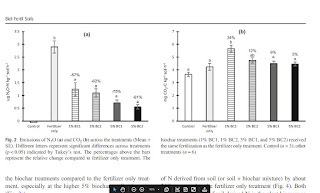 These results suggest that the biochars were able to retain highly mobile 15NO3- ions in soil by preventing them from leaching and denitrification. Such retained 15NO3- ions were accessible for plants. On the other hand, biochars decreased the plant uptake and soil recovery of added 15NH4+ fertilizer although biochar helped to reduce 15NH4+ leaching. We suspect that added 15NH4+ fertilizer was lost due to biochar induced ammonia volatilization (conversion of NH4+ to NH3). Increased soil pH with biochar justifies our reasoning because high soil pH favors ammonia volatilization.

We also noticed that the significant increase in the plant biomass due to the addition of the biochars was because of the enhanced uptake of N derived from the soil. This suggests that the interactions between biochar and native soil organic N may be important determinants of the availability of soil N to plant growth.  Read more at

In AgriChar research group, we are trying to find ways to best close the phosphorus (P) cycles in the environment by recycling nutrients in sediments back to the agriculture and restoring eutrophic lakes.

The nutrients including Phosphorus (P) in upstream agricultural soils are washed out by erosion and reach the bottom of the lake sediment. Excessive load of (P) causes eutrophication problems in many lakes. One of the effective restoration methods especially for small shallow lakes is removal of sediments enriched with nutrients. We examined the factors behind P release from sediment to lake water after removal of sediments from a 1-ha shallow eutrophic lake during two-year follow up period. Removing 7 500 m3 of nutrient-rich sediment removed 6 400 kg of P, including the potential source of P for algae.

However, high pool of releasable P was rebuilt soon after the removal of sediment due to high external P loading, resulting in high internal P loading which sustained eutrophication of the lake. So ways that help to control nutrient losses from fields upstream are of great importance! Our study documented clear strong linkage between sediment P and iron dynamics after the restoration. We also found that the Fe-P and labile P fractions were the most important sources of P release evidenced by their considerable seasonal and interannual changes after the sediment removal.