The quality of biochar and how to engineer the biochar needed for a specific purpose?

The biochar research has grown almost exponentially within the past ten years: 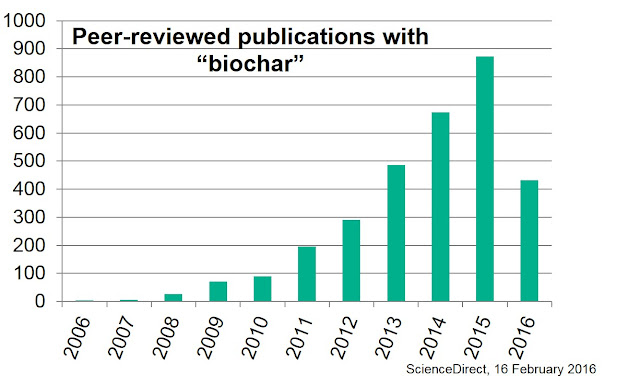 Similarly, the industry is growing globally (large-scale European examples being the Sonnenerde in Austria and RPK Hiili OY in Mikkeli, Finland). While Sonnenerde is already a well-known  producer of growth media, composts and EBC-certified biochar (see their PR video in English here),  the largest charcoal producer in Finland, RPK Hiili OY has also sold several tens of truckloads of their biochar for soil amendment purposes. For example, the City of Stockholm has been using their biochar as a soil amendment  for tree-planting for years with great results (see the recent article in Nature about it under Biochar publications as well as the story in the magazine Ekoelo (1/2015)).

With both the research and industry of biochar use as a soil amendment growing, more and more effort is put also to the classification and certification of the product. Both the IBI's biochar certificate and the European Biochar Certificate (EBC) have been under development already for a couple of years. While the IBI Biochar Certification Program is a voluntary, self-certifying, biochar certification program administered by the International Biochar Initiative (IBI), the EBC is coordinated throughout Europe by the independent quality assurance agency q.inspecta, with inspections of production plants in individual countries carried out by independent national inspection agencies. Inspections take place once a year. Producers confirm that they will keep up-to-date production records. The EBC aims to enable and guarantee sustainable biochar production and to give customers a reliable quality basis. Furthermore, it also aims at providing a firm state-of-the-art knowledge transfer as a sound basis for future EU legislation.

The certified biochars will be more uniform in their nature, for instance, the EBC has a positive list for feedstock, meaning that the carbonaceous material produced from old car tires does not qualify as biochar. Same story with charcoal burnt for energy production (e.g. Torrec and BalBic) as it is then not used in a way that "that does not involve its rapid mineralisation to CO2" and does not allow the material to "eventually become a soil amendment".

The recent study by Verónica L. Morales et al. (2015) makes a giant leap towards closing this gap. As the title Reverse engineering of biochar suggests, this paper underpins quantitative relationships that account for the combined effects that starting biomass and peak pyrolysis temperature have on physico-chemical properties of biochar. For this purpose they used meta-data from published data of diverse biochar samples (n = 102). In addition to the networks of intercorrelated properties and models predicting biochar properties, they have developed also a free web-tool Biochar Engineering implementing the derived models to maximize their utility and distribution. Using this web-tool, it is possible to "design" the biochar that would best suit certain purposes, be it liming acidic soils or fertilization soils with nutrients, high specific surface area or maximum C-sequestration potential (the fixed-C content).

Naturally, this is just the first step along the lines of being able to predict the properties of the biochar, the range of temperatures as well as feedstocks that the model is based on, are limited, but it definitely is the way forward for the biochar research and industry. And the tools seems reasonably accurate in terms of the biochars I have been using in my experiments, especially regarding to the C content and SSA.