Biochar is a promising tool for remediating PAH polluted sites

The use of biochar (BC) has been suggested for remediation of contaminated soils. In a recent study published in Water, Air, & Soil Pollution we aimed to investigate the role of microorganisms in sorption of PAH to BC-amended soils. Fungi, especially the wood and litter-degrading fungi, have shown the ability for humification and to degrade recalcitrant molecules, and are thus suitable model organisms.

Haplic Arenosol with high organic matter content was chosen to highlight the importance of soil organic matter (SOM) in PAH sorption, possibly to form non-extractable residue. Basidiomycetous fungi Agrocybe praecox and Phanerochaete velutina grown on pine bark were inoculated in organic matter (OM)-rich Haplic Arenosol and OM-poor sandy loam with either BC or chemically activated BC (ABC) and 14C-labelled pyrene for 60 days.

Fungi did not mineralize pyrene, but increased sorption up to 47–56% in BC-amended Haplic Arenosol in comparison with controls (13–25%) without a fungus irrespective of the presence of an adsorbent. In OM-poor sandy loam, only 9–12% of pyrene was sorbed to amended soil in the presence of fungus and adsorbent. The results suggest that BC and fungal amendment increased sorption of pyrene, especially to Haplic Arenosol more than by either BC or fungi alone. 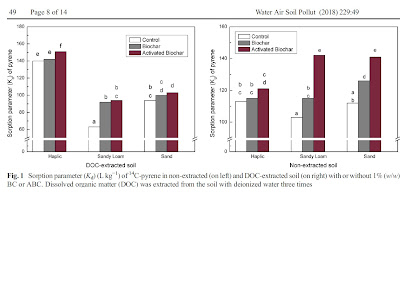 We found that PAH can effectively be sorbed to carbonaceous soil amendments and can thus be a promising tool for remediating polluted sites. The effectiveness of biochar to sorb PAH can further be increased when activating the biochar thus improving not only its BET surface area, but also its pore morphology and surface chemistry. The method was shown to be even further enhanced if biochar addition is combined with treatment with Basidiomycetous fungi, especially in high SOM soils. Sorption of pyrene to the BC-SOM complex enhanced by fungi could help reduce the leaching of pyrene from soil to groundwater, but the results are yet to be validated under field conditions and the role of soil microbial population should be further studied.