As the first country in the world, Finland has free map covering all its biochar activities!

The Finnish Biochar Association is pleased to announce that the map of biochar activities in Finland is now published. The map is continuously updated and will include more details in the future (e.g., scale of each project).
See: https://www.suomenbiohiili.info/biochar-map.html 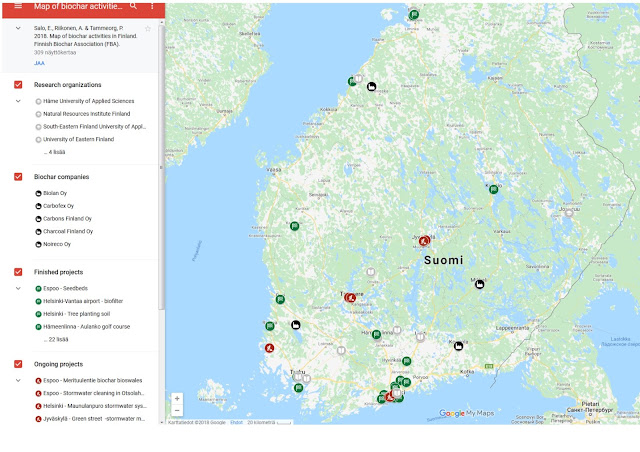 The map includes five different categories:
There are projects about biochar located in around 30 different Finnish municipalities and cities. All of the top ten largest Finnish cities are involved (Helsinki, Espoo, Tampere, Vantaa, Oulu, Turku, Jyväskylä, Lahti, Kuopio, and Pori). Despite the high number of different finished and ongoing biochar projects across Finland, the scale of these projects has generally been small. Majority of the projects were completed during the last two years and many of them have been inspired by the example of the city of Stockholm, which has been using biochar as a standard material in the structural soil since 2009.

The key focus areas around the biochar projects in Finland are effects on crop and tree growth and stormwater management. The scale and number of projects are expected to increase in the upcoming years significantly. And yes, naturally also the AgriChar research group experiments are listed on the map!